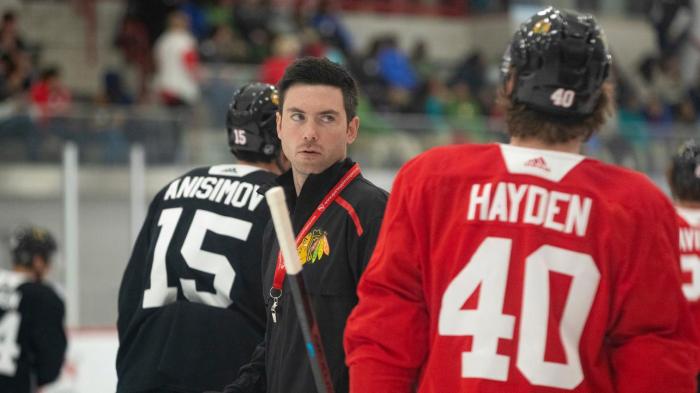 The Chicago Blackhawks have been the best team in the city for close to a decade, but it seems like times are changing for the Windy City’s resident NHL team.

Chicago has had a rough time with sports in recent memory, with the Bulls and Bears being quite dismal as of late. The Blackhawks have been a savior of sorts in that time and helped raise the popularity of hockey in the city.

The Hawks were ever present in the playoffs and managed to win three Stanley Cup Championships in six years. This success made them the city’s favorite sports team for a time, which was incredible considering they were still just a hockey team.

It’s gone downhill very quickly, and the Blackhawks are in danger of falling back into irrelevance. Last season seemed to be a new low, as the team missed the playoffs for the first time since 2008 after a lackluster regular season. To the shock of many, it’s gotten even worse this campaign. At the time of writing, they are on an eight game losing streak, and sit second-to-last in their own division.

This led to the organization making a big decision, which has sent shockwaves across the city and league. Head coach Joel Quenneville, who helped lead the team to its earlier successes, was fired on Nov. 6 by Blackhawks General Manager Stan Bowman. There were some reasons for this, as some players on the roster were not progressing the way they should have under “Coach Q.” Others thought of it being a change that was always going to come, with the organization just making the move a bit early instead of too late.

However, the majority of fans and experts completely disagree with the firing, putting the blame on Bowman instead. Quenneville isn’t in charge of player acquisitions, and it’s become clear he doesn’t have the crop of players available to bring glory to the team.

Senior IMC major Jake Kaufmann said it is unfortunate Coach Q was released. Kauffman said the lackluster performances should be blamed on Bowman. “After the 2013 and 2015 Stanley Cup season he made multiple poor decisions financially leaving little cap room to build a complete team,” Kaufmann said. “He has not brought in any useful additions to assist their star players and you can kind of see the direction the team is heading because of that.”

Unfortunately, it seems the Quenneville firing is just another case of a poorly run front office trying to cover its own backside. They do not want to responsibilities for the mistakes they’ve made in the past, and would rather put the blame onto someone else, no matter how successful they were before.

“It just seems like he was the fall guy,” said journalism professor John W. Fountain. “It’s par for the course in these times. We see folks who have been incredibly successful, when there comes a kind of drought in terms of success, we seem them let go or fired. It’s almost like people have amnesia about the excellence that they brought to a program.”

Now, as the team heads into a fresh start with new head coach Jeremy Colliton, fans are worried the Blackhawks will only begin to further continue their downward spiral.

“I think the future will get worse before it gets better,” said sophomore journalism major Mohammad Samra. “With Coach Q gone, I think there will be a lot of disconnect between players and management. The young guys need more experience and the team overall needs more depth before being able to compete in a much younger, much faster paced NHL.”