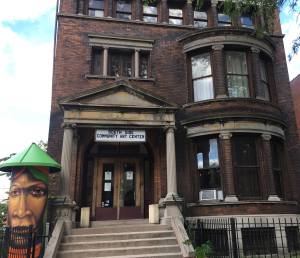 South Michigan Ave. near Bronzeville was empty on the night of Nov. 10. The harsh wind coupled with Chicago’s inevitable cold weather seemed to keep everyone at home. The area surrounding the South Side Community Arts Center (SSCAC) was quiet and still.

Inside the center, however, was a welcoming group of enthusiastic artists and activists. The event, “The Mural Movement and the Black Arts Movement” was underway. The center, which operates in a historical home, contains paintings and drawings done by African-American artists on the first floor. The wooden walls and warm toned furniture invites guests in. The building carries its history in the air.

Audience members of the event were greeted by Natalie Battle Reed, who works for the center. She explained that SSCAC wants to have programs which, “spark conversation.” She also explained that the center works with the School of The Art Institute of Chicago to create classes, most of which are free of charge because of a belief of, “not only learning about art, but doing it.” She encouraged visitors to view the pieces on the first floor before the event began.

The event began with a ten minute screening of short films by painter Don McIlvaine. The films featured McIlvaine’s West Side murals “Into the Mainstream” and “Black Man’s Dilemma.” Then the program moved on to Kartemquin’s film, “Viva La Causa” which documented a mural in Pilsen that artist Ray Patlán painted with neighborhood children. The last clips shown were from the archives of the DuSable Museum of African American History. They documented muralists at work on the Museum of Contemporary Art Chicago’s, “Murals to the People” exhibition in 1971. The screening also included videos of William Walker’s Wall of Love (which was installed at the South Side Community Art Center) and pieces by muralists Mark Rogovin, John Pitman Weber and Eugene “Eda” Wade.

After the screenings were presentations by Wade and Arlene Turner-Crawford. Through powerpoint slides, Wade explained his experience working on with William Walker on the “Wall of Respect.” Wade presented different installments of the wall, some in Chicago and others in different cities.

While Wade reflected positivity on his work, he said that being a muralist wasn’t always, “peaches and cream.” He recalled painting in an area that was not always safe. While many people asked questions and complimented his work, Wade also described that, “people would be shooting,” in the area while he worked on his art.

Turner-Crawford focused most on how she enjoyed collaborating with others. She presented a mural in which she worked with the Girl Scouts, Boy Scouts and The Arsenal Tech CETA program in Indianapolis to create six murals. Turner-Crawford and the students worked on the art together, and she created a mural of her own. Turner-Crawford’s work  featured pyramids in color at the top of the painting, but at the bottom was a black strip for feet off the ground to represent, “a hundred years of oppression in America,” she said.

Like Loading...
‹ Cook County Clerk Breaks Down Political Future
“The Nutcracker and the Four Realms:” Not Disney’s Finest ›