Home › Feature › A Name to the Face: Albert Fernandez

A Name to the Face: Albert Fernandez

By Will Dancer
Staff Reporter 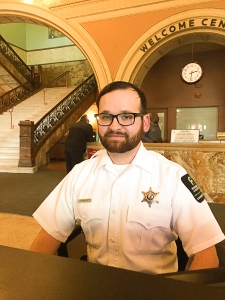 Albert Fernandez. Photo by Will Dancer.

Every day, the security guards of Roosevelt University sit at the check-in desks, filing paperwork and greeting students and visitors as they stream in through the revolving doors and into the elevators.

Checking IDs and maintaining an overall safe and friendly atmosphere is top priority for the crew, and consequently, their non-confrontational attitude has helped Roosevelt remain as a relatively welcoming place for students and newcomers alike.

Whether in the Auditorium, Wabash or the 14th floor of the dorms, students have come to recognize the names and faces of the security force.

Lead Security Officer Albert Fernandez is one of these faces.

Having been involved with Roosevelt campus safety for nearly seven years, Fernandez spent his first year at the University Center and was transferred once the Wabash building was completed. Working mostly in the mornings, he can usually be found in the Wabash or Auditorium building, rotating around a schedule with the other guards.

Operating with a respectful attitude for those who outrank him, Fernandez said he tries to maintain a balance that enforces both cooperation and ease with the students and visitors of the campus.

“Students just got to realize that I didn’t make the policies, I’m just here to enforce them,” Fernandez said. “During midterms and finals there’s a lot of tension, so you deal with it.”

Fernandez has seen many people go in and out of the university, recalling both the NFL Draft and graduations hosting thousands of people.

Fernandez’s experience as a security guard stemmed from a brief stint in the U.S Army. However, when he was 19-years-old, he injured his leg during basic training en-route to becoming a petroleum expert, ready to be shipped off anywhere from Alaska to Germany.

Fernandez said this injury led to much uncertainty regarding his future. “The job available was dealing with fuel and oil… They show you a list of the top three jobs available and they put you where they need you,” Fernandez said.

While not going into much elaboration, Fernandez expressed some regret about not being able to remain in the Army, noting a desire to have completed his contract. However, Fernandez said he used the knowledge and experiences he learned in the military to boost his credibility as a trained security guard.

His work with Roosevelt and the day-to-day interactions with students has inspired him to go back to school. Currently enrolled at UIC, Fernandez said he is getting an undergraduate degree in business. Once completed with the program, Fernandez said he school plans on using his security benefits to take some classes at Roosevelt.

“Over the years, I saw all these people graduating, and I was watching this and thinking, ‘Dude, I can do this, I can go to school here and graduate,”’ Fernandez said.

For now, Fernandez said he is content with the direction Roosevelt’s security is moving in. Fernandez said that he supports the new director of security, Tony Parker, and further commented on new guard rotations that prevent the job from getting too boring and the frequent trainings that keep him prepared.

A family man now, working in the morning has allowed Fernandez to spend most of his free time at home with his wife and kid.

“It’s a boring life, but I love it,” Fernandez said.

Like Loading...
‹ Frankie Valli Returns to Auditorium Theatre for the First Time in 40 Years
RU Reacts to Midterms, Prepares for Mayoral Race ›