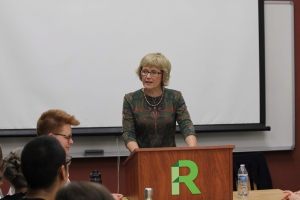 Diana Schaub at the podium. Photo by Andre Hughes.

On March 6, 1957, the Supreme Court decision in Dred Scott redefined what it meant to be a person of color in the United States.

On Nov. 1 the The Montesquieu Forum, an annual series of lectures, discussed this decision with Diana Schaub, a professor of political science at Loyola University in Maryland, and visiting professor of government at Harvard University.

The lecture was a discussion on Abraham Lincoln and the daughter of Dred Scott.  At the lecture, Schaub stated that she wanted to “explore the relationship between the Declaration of Independence and the U.S. Constitution.”

Oftentimes, Lincoln is just merely known for the Gettysburg Address. Schaub said it was important to highlight another side of Lincoln concerning the issue of slavery.

For historical background, Dred Scott was an African-American man who sued his master’s widow for freedom, on the grounds that he lived as a resident of a free state and territory. This is what led to the Dred Scott decision.

On March 6, 1857, the Supreme Court ruled that Dred Scott wasn’t entitled to his freedom, having resided in a free state and territory. Lincoln took it upon himself to address his stance on slavery to white males in the Illinois House of Representatives.

In a speech about Dred Scott, Lincoln said the decision was “erroneous.”

“Lincoln argued his points opposing slavery using the Constitution and the Declaration of Independence,” Schaub said.

“Much of Lincoln’s rhetoric throughout the 1850s was designed to shift his white audience away from their anti black sentiment by eliciting what he believes to be a natural and universal sentiment against slavery. A sentiment that could be strengthened and confirmed by a proper understanding of the nation’s founding principles.” Schaub said.

Many students and faculty attended the Montesquieu event and learned something new. Thomas J. Kernan, assistant professor of music history, said he enjoyed Schaub’s analysis and was able to appreciate Lincoln’s work even more.

“It was a good reminder that even after spending a lot of time with Lincoln’s writings over the better part of the past decade, there are so many gems in his work. It is appropriate to question and critique the narratives we have crafted of ‘great’ leaders of the past,” Kernan said, commenting it can be easy to question whether Lincoln’s beliefs were legitimate.

“However, closely unpacking his language, ideas, and work can prove so profitable in seeing just how thoughtful he was in confronting monumentally difficult situations,” Kernan said.

“Although I have some disagreements with Dr. Schaub regarding interpretation of both the founders’ and Lincoln’s stances on racial justice, I thoroughly enjoyed Dr. Schaub’s lecture,” Love said. “This was a masterful demonstration of careful analysis through a close reading of Lincoln’s speech, given context through a deep study of the historical situation in which the speech was delivered.”

The Montesquieu Forum is known for hosting historical events for Roosevelt

and the public. The Forum has been able to draw many to their events consistently. Throughout the years many faculty members have attended these event. When asked what drew them to the event, staff members began to express their appreciation for the Montesquieu Forum.

“I’ve been coming to the Montesquieu Forum events for years—as someone who studies and teaches political theory, they are of great interest to me,” Love said.

“I am something of a “regular” at the Montesquieu Forum events. I find the Forum provides some of the finest lectures on the RU campus. Professors Warner and Trees do an exceptional job in pulling off such an impressive series,” Kernan said.

Like Loading...
‹ Men’s Basketball Ready to Build Upon Record Breaking 2017-18 Campaign
Frankie Valli Returns to Auditorium Theatre for the First Time in 40 Years ›