Home › Arts & Entertainment › Gabe Polsky on Spreading Creativity, in Sports and The Rest of Society

Gabe Polsky on Spreading Creativity, in Sports and The Rest of Society 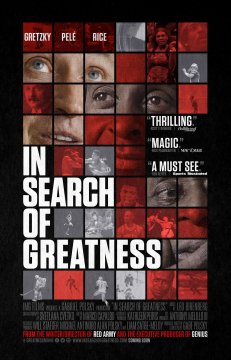 Gabe Polsky’s second documentary, “In Search of Greatness” explores how creativity and passion can shape champions.

The film features interviews with legendary players such as Wayne Gretzky, Jerry Rice and Pelé. Each of these household names speak about their frustration with the uniformity and structured nature of sports institutions. The documentary also includes investigative reporter David Epstein and British author Ken Robinson. Both Epstein and Robinson agree with an imaginative approach to coaching rather than a systematic one.

While the film mainly focuses on athletes, its themes connect to members of any field. “In Search of Greatness” discusses the ways creative people are made to conform. Viewers in many positions can relate to this concept.

When asked about why he chose to concentrate on sports, Polsky said, “I think we are a society obsessed with sports… I said ‘okay, I’m gonna deliver the message through the greatest athletes of all time because people are gonna listen to them.’”

He also explained that the film’s theme of honoring individuality sets it apart from other sports documentaries.

“When I was screening the film,” Polsky said, “I never showed it to sports people.” Rather than addressing the sports community, he desired to connect all people on an emotional level so that audiences would, “basically see themselves in every aspect of the movie and sort of think about themselves think about how they fit in in the world,” Polsky said.

Polsky certainly met his goal of reaching viewers who knew nothing about the famous athletes featured in the film. Gretzky and Pelé provided insightful stories of how they defied repetitive and lackluster coaching styles. Their experiences are relatable to anyone who feels restricted by their supervisors.

“In Search of Greatness” also depicts creativity outside of the sports realm. Intertwined with footage of games are clips of notable artists and innovators. Depicted are Meryl Streep, Albert Einstein, David Bowie and many others. Polsky explained that he included these visionaries in the film “to hint that it’s all the same human nature.” This cinematic technique helps each viewer understand that people can “pursue greatness in anything,” Polsky said.

The film encourages a change in society’s current perspective on creativity. Polsky articulated that passing on ideas about how spreading ideas naturally increases imagination among everyone. In regards to sports, he said that change comes when people challenge old methods and generate new ones.

“Slowly but surely, there will be good coaches,” Polsky said.

On a larger scale, the director said that individuals should share their thoughts. “You pass on these ideas, and they proliferate… it comes through experience,” Polsky said.

Polsky hopes people will recognize the film’s messages about free thought and originality and will apply it to their own lives. “Hopefully, it will help spread those kinds of messages,” Polsky said.

Like Loading...
‹ The Blaze’s Open Mic
Humans and the Earth: MCA’s ‘a body measured against the earth’ ›