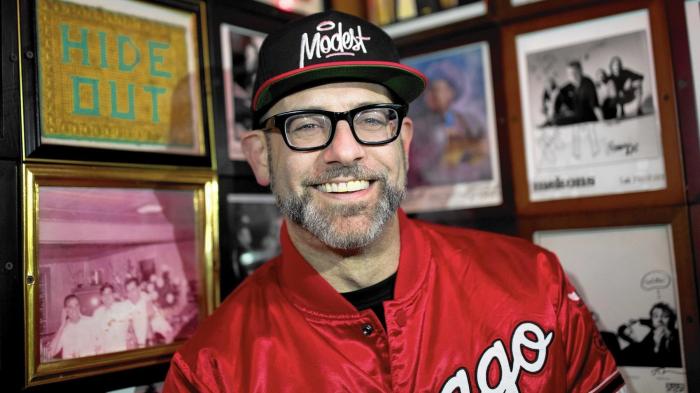 Kevin Coval came to Roosevelt University to speak to the first year honors program students. Kevin Coval is a poet, and the artistic director of Young Chicago Authors (YCA) and founder of Louder Than A Bomb. In Sarah Maria Rutter’s honors 101 class, students were assigned to read and analyze his newest book, “A People’s History of Chicago” then later prepare questions for his student-led visit. Students were also expected to research Coval himself.

Rutter said she found out about Coval’s work through his colleagues he’s worked with from his association and the YCA. “I worked with some folks associated with YCA and Louder Than a Bomb (LTAB) pretty casually about 10 years ago, so I’ve always known about Kevin and his work. Our mission and outcomes—the Honors Program’s that is—closely align with the pedagogy of YCA, so it seemed like a good fit,” Rutter said.

Rutter said she wanted the students to meet Coval because it was inspiring. “In Honors, we aim to promote these types of experiences, and really push students into situations where they have the chance to encounter someone like him, someone who clearly values activism and intellectualism, and is also winsome and inspiring,” Rutter said.

While researching Coval, students developed either a positive or negative connotation of him. When asked about her views regarding Coval prior to meeting him, freshman sociology major Azalia Resendiz said, “I first heard of Kevin Coval back in high school with my school’s LTAB Team and I didn’t know who he was or what he looked like. When he first came to my school to speak I had no idea he was a white man. The way he speaks and holds himself as a person comes off as trying to be something he is not.”

She went on to talk about her views on his book saying, “The neighborhoods he did choose to write about, I do have some hesitation on the authenticity of it given that he grew up in the suburbs as a white kid and not in the inner city of Chicago as a person of color. But that’s not to say he isn’t a talented writer.”

Freshman journalism & international studies major said she made a false judgement about Coval. “I thought Kevin Coval was going to be one of those pretentious authors who would boast about his local fame. However, he genuinely has a passion and a knowledge for the art scene in Chicago,” Landwehr said.

Coval has been accused by his critics of cultural appropriation. In a essay of Coval’s third book, author Nate Marshall said, “L-vis Lives works to critically examine the reality and ramifications of white people appropriate black forms. This critique is an interesting mantel to take up but ultimately it is not Coval’s most potent thesis. There are times in the book, such as the poem ‘posing,’, where we wonder if Coval is doing just that. There are times when he seems so critical of white people and whiteness that it strikes slightly insincere,”Marshall wrote in the essay.

Freshman history major Sophia Gallo said Coval has shown to be a good advocate for minorities and oppressed people. “He has definitely proved himself as a good ally – advocate, but at the same time, he is a cis white man, so that needs to be taken into consideration when we give him praise,” Gallo said. “We need to be amplifying voices of women and people of color and have to make sure we aren’t taking any credit from marginalized groups when praising him for his contributions”.