Home › Opinion › Discrediting the Lives of Trans, Non-binary and Genderqueer People Across America

Discrediting the Lives of Trans, Non-binary and Genderqueer People Across America 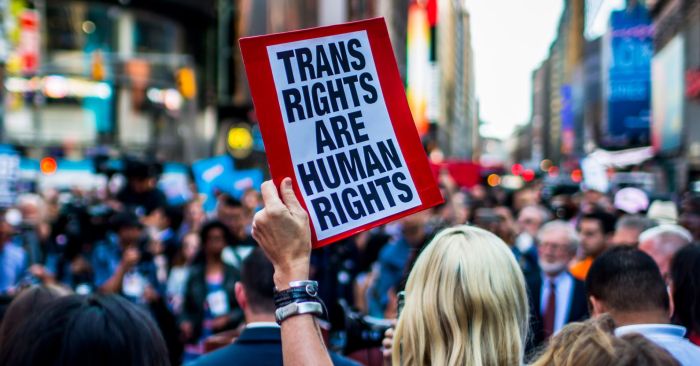 Trump’s proposal to change the definitions of gender comes over a year after his first attempt to ban transgender people from serving in the military. Photo by Michael Nigro/CNBC.

Under the Trump Administration, it could be possible that gender might be defined by biological sex. This means that someone who was assigned female at birth, or born with female genitalia, would be legally considered female, even if they were to personally identify as a different gender. This will essentially undo any progress the people of the LGBTQ+ community were able to make during the Obama Administration.

Under Obama’s presidency, the LGBTQ+ community was given important rights that helped affect their everyday lives, such as the Matthew Shepard and James Byrd Jr. Hate Crimes Prevention Act that passed into law in October 2009. This act made attacks based on the victim’s actual or perceived sexual orientation or gender identity federal hate crimes.

Furthermore, because of Obama’s Affordable Care Act, those apart of the LGBTQ+ community could no longer be discriminated against by insurers because of their sexual orientation or gender identity. The Trump Administration’s proposition that gender is only biological sex will affect the lives of many across America. They are wanting to remove the word transgender out of legislation, which would take it out of Title IX. Thus, removing their rights against sex discrimination.

Gender is such a complicated and personal thing to everyone and there are three distinct parts that make up someone’s gender. First, there is gender identity, which is how someone personally defines their gender. It is based on how a person aligns with what they perceive as gender. Then there is gender expression, which is how a person presents their gender. This can be through actions, dress or demeanor and how these presentations are perceived by gender norms. Gender expression is basically separated by femininity and masculinity.

Then there is biological sex, which again is the physical sex characteristics a person is born with and develops. To use myself as an example, I identify as female, my gender expression is fairly feminine and I was assigned female at birth. So, I am what is referred to as cisgender, which means I identify with the gender I was assigned at birth.

Or someone who identifies as female and says their gender expression is also fairly feminine, but they were assigned male at birth could identify themselves as a trans woman, or even just female. Or someone might not personally conform to the gender binary at all and identify as non-binary. It is all up to the person and how they personally identify themselves.

How anyone could take away the right of someone to identify as whoever they wanted to baffles me. I will never understand why people feel the need to control how other people identify themselves. Someone not identifying by their biological sex does not affect anyone but that person in any way shape or form.

People from the Trans, Genderqueer and Non-Binary communities are just trying to feel comfortable in their own bodies, and how someone can take that away is absolutely unbelievable to me. It is hard for someone who is trans or genderqueer to feel okay in their own biological bodies. Say someone was assigned female at birth and identifies as trans, they may feel as if they were born in the wrong body. Their physical sex characteristics would not match the gender they want to identify as. Making someone legally identify as their biological sex is a painful reminder that they are not accepted for who they are here in America.

Cissexism here in America needs to stop, cisgender people see transgender people and genderqueer people as “weird” or “unnatural” when in reality someone identifying as a different gender than they were assigned does not affect them at all.

I want all cisgender people out there to realize the privilege we have. We do not have to face the discrimination people from these communities face in their everyday lives. Whether it is by being misgendered or physically attacked for how someone identifies themselves, it affects them every day. It is time we cisgender people stop purposefully misgendering people and bullying those who are different from us for no apparent reason.

You do not necessarily have to understand, but you do have to accept people for who they are. It is not that hard to take a step back and realize it is not your place to say whether someone can identify how they want to identify.