The event was held at Roosevelt University in Fainman Lounge, featuring performers from Young Chicago Authors. The performers in the event were Matt Mus, a Chicago Rapper, Kara Jackson, a poet and Christian Jalone, a singer. Young Chicago Authors is an organization focused on giving youth in Chicago a safe haven to express and enhance their writing abilities.

Christian JaLon, a 21-year-old aspiring singer born and raised on Chicago’s South Side, took the stage while the audience clapped to the rhythm of her beat. 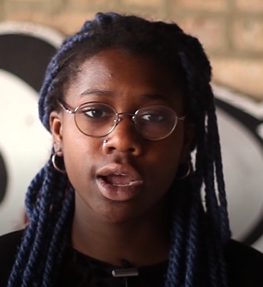 “One thing that the audience needs to know is that there is light at the end of our darkest tunnels. People need to know that there is hope, let’s be hopeful and remain faithful in our journeys,”  JaLon said.

JaLon feels that her purpose is to be a light in a dark world.  The audience could understand JaLon’s message as she smiled singing, “I got joy, a joy the world didn’t give to me and the world can’t take away.”

Jackson said she wanted her listeners to “see the importance of my black lineage, and identity as a queer black woman, and how these ingredients go together,” said Jackson.

The Honors Programs main goal with the event was to raise awareness according to the Director of Roosevelt’s Honors Program, Marjorie Jolles.

“The goal is for everyone present to have fun and take inspiration from the vibrant displays of socially, politically engaged art we’ll see from YCA, and to think in fresh ways about the different forms that learning and exploring and communicating can take,” Jolles said.

Sarah Maria Rutter, the program administrator for the Honors Program, felt that it was important to collaborate with YCA for the event.

“It is significant that we partnered with an organization that celebrates youth and the work they do while also cultivating writing and identity,” Rutter said.

Casey Fitzpatrick, a 20-year-old student at Roosevelt, felt it was important for Roosevelt to showcase the talent of Chicago. “Since Chicago is a diverse cultural hub it’s important to celebrate young authors, because that’s where culture comes from,” Fitzpatrick said.

Roosevelt and Young Chicago Authors both stand on the values of social justice and awareness. The youth who participated in the event were able to express themselves freely and unapologetically. This event was an opportunity for like minded youth to gather and express the issues affecting society through various forms of art.