Home › Feature › How SPEED got Willis Tower for Homecoming

How SPEED got Willis Tower for Homecoming 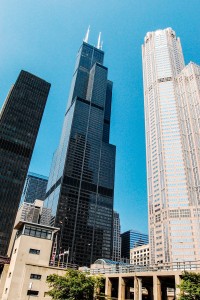 The Willis Tower is the first time RU has hosted homecoming there. Photo courtesy of Eric Allix Rogers.

The Willis Tower is one of the many hotspots in Chicago known for having a great view. It is home to the Skydeck, located on the 103rd floor of the tower, that offers a view of Chicago and beyond. This past Friday, the 99th floor of the building held the 2018 Homecoming Dance hosted by SPEED. But how did they get the venue, and what was the process? SPEED dished for us the process and reasoning behind their choice.

The venue actually came into consideration from last year’s SPEED board, suggesting it to the new one. Jeya Manivannan, volunteer coordinator for SPEED, said each school year, a new board replaces the one from the previous year. However, the previous board chooses the venue for next year’s homecoming.

Other venues were evaluated before deciding on the Willis Tower. A process takes place, in which SPEED checks out the venue and looks at a number of factors, including location and perks that would make Homecoming memorable. Sergei Stoliarov, a member of SPEED, said, last year’s event wasn’t memorable or exciting.

“Well, we went to the Field Museum. There’s stairs down, and it’s just a long hallway, which is more like it, I think it’s supposed to be for 400 people, but, to be honest, it was just sad,” Stoliarov said. “It’s under the ground level and it literally looked like a long box. It didn’t offer much because there were some ways from there to get to exhibits, but those exhibits would be closed and we wouldn’t be allowed to go there anyways.”

In the end, the SPEED board ultimately decided on Willis Tower due to location and view, their reasoning simple.  “Location and definitely selling of tickets. This year, we sold out within three days. That’s 200 tickets. We affirmed that suggestion from last year because when we went to go visit it, the venue was really open, it was nice, it was all-around, you can see the city from every view,” SPEED member Areej Askar said. “The Adler Planetarium was a great location last year, but it was kind of cold at that time and we had to go outside to get the picture of the skyline, but this one, it’s like people pay over $30 just to go up to the Skydeck versus here, we’re only offering $15 to go up to the 99th floor and get a full view,” Askar said.

Reserving the venue was easy, said Askar. “José contacted them… and we just went there, checked over paperwork, confirmed, who we’re having, but we had to supply food, a menu, and exactly how many tables set up, how we wanted it, the DJ, photo booth, everything was also on us. We just needed to confirm with that lady that she would have the papers in order and our contract signed.”

Members of the SPEED board were satisfied with the venue and felt it was a good choice. “The view makes everything better. It’s on the 99th floor, so you can see the whole city at a whole different light. You can see the lake, you see the city, it’s like a great view, and moreover, I feel like the venue is really classy,” Manivannan said.

The SPEED board has also started looking towards next year, possibly, after hearing opinions from students at Roosevelt. Stoliarov said student suggested hosting next year’s homecoming in the Auditorium Theatre.

“There was a suggestion from the students, which I personally would like to try, to do it in the Auditorium theatre,” Stoliarov said. “Because they do have an option to level out the stage and the seat and put tables there, but José said that should be arranged more than a year in advance because they have contracts with Joffrey and they’re doing their runs and practices and performances, specifically in the fall, too, so that will take more than one SPEED board to reach that.”

SPEED’s Homecoming was successful this year, and riding on this success, maybe the gears are already turning for next year’s Homecoming. Students of Roosevelt will just have to wait in anticipation until next year and see what SPEED has in store.

Like Loading...
‹ From Anita Hill to Christine Blasey Ford’ Discussion Evaluates How Society Treats Women
Taking Over the Streets in the Chicago Marathon ›