Home › Opinion › Keeping a Sexual Predator Off the Supreme Court

Keeping a Sexual Predator Off the Supreme Court 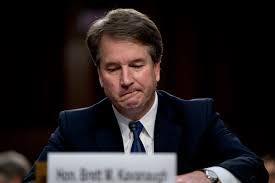 Here we go again, giving another sexual predator a high position of power. We saw it with Donald Trump, and now Brett Kavanaugh could be appointed to the highest court in America. Not to mention, Kavanaugh could sit in that position for the rest of his life. It is hard as a woman to continue to let sexual predators get away with what they did.

The biggest defense people have given Kavanaugh is that he is an “alleged” sexual predator. That the testimony of Dr. Christine Ford means absolutely nothing. Or that the other victims have come forward mean absolutely nothing. Yes, “he said, she said” cases are tough, but what person would knowingly put themselves through the trauma Ford is going through right now? Not only does she have to repeatedly relive her assault, but she is now open to so much ridicule by the American public.

Ford has been extremely brave to come out to the entire nation about being sexually assaulted back in high school. When she said in her opening statement that she did not necessarily want to come forward but she felt it was her civic duty it really struck a chord in me. She made a huge sacrifice in order to try to stop Kavanaugh from being on the Supreme Court.

Ford is sacrificing so much coming forward, especially her credibility. It is tiring to hear hear people ask why it took her so long to come forward. If you think about the social climate back in the ‘80s, Ford would have been seen as promiscuous. The sexual assault she went through would have been blamed on her. We still see that in today’s day and age, victims seemed to be blamed for their own sexual assaults. And now we have our President mocking Ford in front of the entire country. Trump was basically accusing Ford of lying by mocking her opening statement.

Kavanaugh came in with excuse after excuse to try to clear his name in his opening statement in front of the senate committee. He was so aggravated the entire time. As we’ve seen with many of these sexual assault cases, the men deny until they get caught in a lie. It was hard to listen to his opening statement, because he was just so angry the entire time. He kept bringing up that he is a supporter of women and that he has helped so many women. Just because he nominated more women to be his law clerks does not mean he wasn’t a sexual predator in his past.

It baffles me as to why this keep happening. I am tired of seeing sexual predators getting free passes just because they are in a position of power. These men seem to only be sorry once they get caught. From the Harvey Weinsteins to the Kevin Spaceys and now the Brett Kavanaughs of the world, it is frustrating to see more and more of these sexual predators popping up. These men are sexual predators and do not deserve any praise.

I do not want this man to possibly decide the fate of our everyday lives. He could possibly replace Justice Kennedy, who happens to usually be the swing vote, and put the Supreme Court in a more conservative point of view. Kavanaugh could have the power to ruin people’s lives across the country. What does it say as a country that we are just going to let a sexual predator sit in the highest court we have? These sexual predators have ruined lives, yet here we are just letting them think what they did was okay.