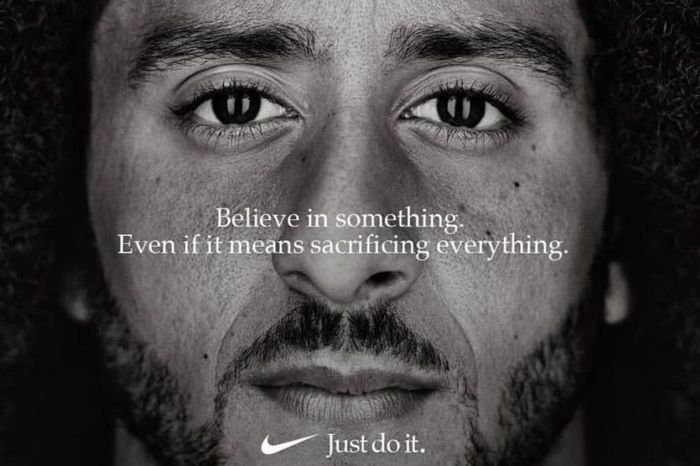 On Sept. 4, 2018, Nike released their brand new campaign that included sports stars like Serena Williams and Lebron James. Nike took heavy scrutiny from portions of the public for the inclusion of, former NFL quarterback, Colin Kaepernick as the face of this new ad campaign. The Kaepernick ad reads, “Believe in something. Even if it means sacrificing everything.” Since the initial release of photo collection of the ads, Nike has released a two-minute video ad voiced over by Kaepernick.

The initial reaction of people burning Nike gear, people calling for a boycott of the company entirely and even a tweet from President Donald Trump caused the stock of Nike to drop to three percent on the day of the initial release, reported by CNN Money. For many who had this initial reaction to the ad, it was seen as a major disrespect to the soldiers who fight for the freedoms that many people in the United States hold dear. This way of thinking about the ad campaign is the wrong perspective to take on it.
Nike took a major risk by putting themselves on the line to support many of their customers who do agree with the message of the ad campaign. The message is one of positivity and empowerment that many customers look for in everyday life.
Kaepernick is that for people and especially those people who have been marginalized or been told that they do not have a voice. Kaepernick took a knee for the national anthem to protest the police brutality on minorities after the murders of young black men by police officers. This was a black athlete using his platform to give attention to a major issue surrounding American political discourse.
Players kneeling during the national anthem is not disrespectful to veterans or soldiers who have lost their lives for this country because these players are using the freedom the veterans gave them to better the country they believe in. It honors those veterans’ sacrifices by using the freedom that some fought and died for. As a son of veteran who served 26 years in the U.S Army, it is irritating to hear people say the players are disrespecting veterans by using their freedoms, but when it comes to thanking or helping veterans, they turn and walk away.
The same argument of disrespecting troops has also been used for this brand new Nike ad. Opponents of the ad campaign want to start going directly after Kaepernick as a person or to say that he did not sacrifice anything or what he did sacrifice is only materialistic items. One of the outspoken people against the ad and Kaepernick is Taya Kyle. The wife of “American Sniper” Chris Kyle, posted on Facebook her feelings on the ad with Kaepernick.
“Sacrificing what exactly? A career?” Kyle said in her post. “At best, that is all Colin sacrificed… some money and it’s debatable if he really lost his career over it.”
“How about other warriors? Warriors who will not be on magazine covers, who will not get lucrative contracts and millions of followers from their actions and who have truly sacrificed everything,” Kyle states. There is a difference between sacrificing your life and sacrificing your livelihood, but it is wrong to say that one is more important or more honorable than the other.
Pat Tillman, a former Pro-Bowl Arizona Cardinal safety who left the National Football League to enlist in the U.S. Army where he fought overseas and was subsequently killed in the line of duty, gave up his career and his life to protect the United States and the freedoms and rights held within it. By saying that Kaepernick is disrespecting the sacrifice Tillman made for this country when he took the kneel during the national anthem, which was suggested to him by Nate Boyer, a former NFL player who served in the United States Army as a Green Beret, is dishonoring his sacrifice and what every other veterans’ sacrifice represents.
The importance of showing Kaepernick’s sacrifice is to empower those who feel they have no voice to express their opinion or feel marginalized by society or feel no one is looking out for them in this world of uncertainty. It is not to undermine those who have sacrificed themselves for this country of the free, but to strengthen the core within it.
I support the risk Kaepernick and Nike made because it changes the way people see themselves and their voices in this society of many voices. Many other people in America agree because days after the release of the new Nike ad branding, the Nike stock hit its all-time high on Sept. 14, 2018. Kaepernick’s sacrifice represents the same thing as Chris Kyle’s, Pat Tillman’s and Nate Boyer’s sacrifice which is for the love of the country, the hope that America can become even better than it already is and remain true to its promise to the American people.