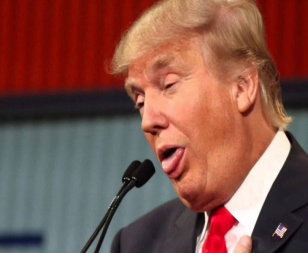 President Trump was awarded the inaugural winner of RU’s Outstanding Social Justice Award due to his work to improve poverty in minority neighborhoods. Over the weekend, Trump was invited on stage to accept his award, which was voted on by board members.

Members in Auditorium Theatre rose to their feet, giving Trump a round of applause. Awestruck by what he would call thunderous applause, Trump took a moment before giving a speech. “Wow, what a great turn out. This is going to be good for ratings,” Trump said, placing the trophy on the ground.

Trump’s speech included his accomplishments as a president in his first year in office. After noting his few accomplishments that have surely improved poverty in the United States, Trump threw his head back and clapped at uneven intervals.

One CCPA student said he thought it is important to note Trump’s accomplishments for the country, such as announcing the government will continue funding the military by 100 percent in order to fund the Third World War with N. Korea and Russia.

“I think it’s worth noting that he’s done so much for our country,” said one CCPA student. “It’s so amazing that Roosevelt was able to give this to someone like Trump and not Obama or Hillary. I think Trump has done just so much more than they have put together.”

One senior baseball player said Trump is good for Roosevelt’s ratings. After noticing historic record low approval ratings from students, the student felt this would draw more students to attending.

However, there are some students who felt the award was announced prematurely. “I think it’s a bit too early to give this award away,” one student said, concerned others haven’t finished long term projects. “The school should’ve waited until the week of graduation in May to give this award. I mean, how can I compete with someone like Trump? His ultimate goal is to truly help others here.”

After the speech, Trump left the podium while waving to the audience. With a roaring ovation, Trump took a minute to look back at the crowd, forgetting his trophy that was left on the floor.

*This is an article from the Scorch, the annual satire issue of the Torch*