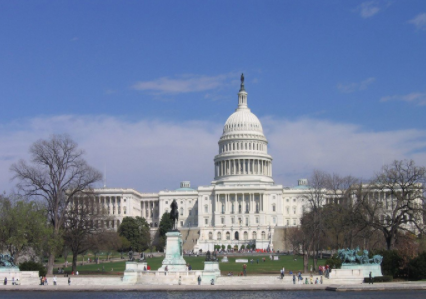 In total, the 2018 government shutdown lasted three days and was reopened with funding for
only three weeks of government activity. Photo courtesy of Wikimedia Commons.

A few weeks into the new year, Congress announced that the government would shut down. Government shutdowns happen when the House and the Senate cannot agree on a spending bill to fund the activities of the federal government. When this happens, those parts of the government that are deemed “non-essential” are shut down or understaffed. This is most easily seen in the National Parks Service across the United States, which are typically shut down or understaffed during a shutdown.

One big issue on this spending bill, and the biggest source of disagreement, is the DACA program. DACA, or Deferred Action for Childhood Arrivals, is a program that allows those that were brought here from other countries by their parents at a young age to apply every two years to be able to stay in the U.S. indefinitely. DACA was an executive order that was carried out by Obama in 2012. It was recently rescinded by Trump, leaving 800,000 people in jeopardy of deportation.

One reason for the shutdown is that the Republicans and Democrats have been having a progressively more difficult time working together in the past few years.

“We have so much polarization right now in society. People aren’t working across the aisle anymore…that spirit of compromise and bipartisanship has been sorely lacking in recent years,” said political science professor Bethany Barratt.

This increasing difficulty to work together is because of a term called political asymmetric polarization.

“Republicans have gone much more far to the right than Democrats have to the left… the two parties are so far apart that they don’t have anything to talk about,” said political science professor David Faris. “The system was not designed to be inhabited by two highly ideological, deeply opposed political parties. The first time that this happened, the country had a civil war.”

The current president could also have a lot to do with the inability of Republicans and Democrats to work together in Congress. “He has deliberately and sometimes, not on purpose, done a lot of things to increase polarization between the parties, so certainly he hasn’t helped the issue at all,” said Barratt.

Initially, Trump stated that he would sign off on any agreement Congress came to regarding DACA, but went back on his word a few days later. So, no matter what sort of compromise Congress came up with, it would not be signed off on by the president.

“We have to hope that this time, the president is true to his word and doesn’t just change his mind,” said Barratt.

Drastically different ideologies were not always such a problem in Congress. The Civil Rights Act of 1964 was a bipartisan effort passed by Republican and Democratic senators alike and signed into law by President Johnson, a Democrat.

“The Republicans began their drifting to the right in the 1960s and that ideological drift right accelerated during the conservative resurgence of the 1980s,” said history and political science major Cody McHale. “GOP Politicians have a hard time agreeing among each other, let alone with the Democrats they have drifted so far from.”

A few days after the shutdown, the government reopened after Congress passed a continuing resolution, which means that the government will be temporarily funded through Feb. 8 and Congress will continue to debate over the spending bill until the government runs out of money again.

“They may have just ‘kicked the can down the road,’ which means they’re going to have the same fight in a few weeks, but it theoretically gives congressional leaders time to work out a compromise,” said Barratt.