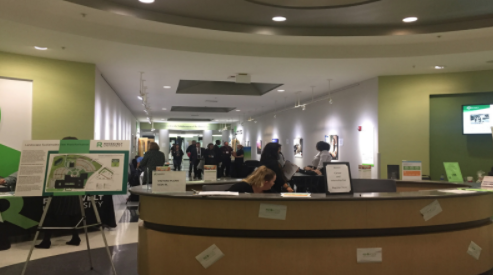 Roosevelt University held a career fair in Schaumburg campus for the first time in five years. The occasion was filled up with students and parents who searched for companies on their fair maps and walked around the hall, speaking with recruiters and representatives of companies, including the Chicago Police Department, the Metra, Zurich Insurance Group, T-mobile and State-farm.

“We have not had a career fair here at the Schaumburg campus since 2012, so this was a great collaborative effort between many people,” said Assistant Director of Academic Advising and Career Development at RU’s Schaumburg Campus, Danette Schulz. “We had the internship fair committee to kind of get it off the ground, and we bought in from everything, from faculty to people who have relationships in the different colleges to each one of us.” Schulz said.

Schulz also explained that some of the employers were local, and to reach out to more, the team collaborated and advertised in the Schaumburg business association newsletter. Schulz said they reached out to a between 50 and 60 employers to get to 24 attending companies.

With a registration of over 120 students, Roosevelt`s team effort to put Schaumburg’s career fair together allowed students to meet employers, pump their network and learn about career and internship opportunities.

“This is a great opportunity, particularly to students who aren’t able to get to the downtown campus. I found the employers that I did talk to to be very interested in the candidates, in terms of our perspective, background, education and work experience,” said MBA management major Shareeka Ross, who attended the career fair. “I do intend to reach out to the employers that I spoke with today. I’m hoping to at least walk away with prospectively five interviews for positions and opportunities.”

Ross stressed out that despite the good opportunities, students need to be prepared and research the companies and positions ahead of time to be able to actually engage in a conversation with the employers.

“It was a good opportunity to meet employers. Even if you aren’t being employed it was just nice to interact with them. It’s good practice,” said junior marketing major Richard Soby. “It was interesting because some companies had different programs, like paid and unpaid internships and also full time or part time jobs. I wish there were more companies in the Chicago area, but I thought it was good.”

The excitement of students was matched by the companies, which were happy to attend the fair, Schulz said. “The employers were so excited to participate and support the career development from Roosevelt University. That was so clear,” said Schulz. “Will it definitely work out? I don’t know, I can’t say. But I think you’re gonna learn to be more confident as a result of talking and networking, because it is an awesome networking opportunity,” said Schulz.

The next career fair is scheduled to take place at RU’s Chicago campus.