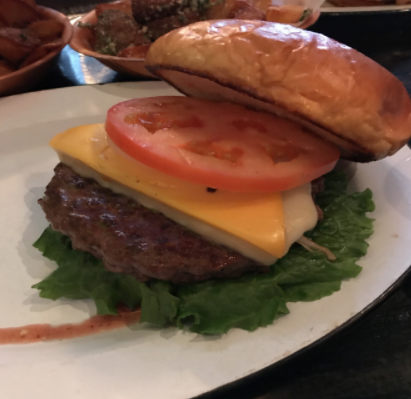 One of the burgers. Photo by Zachary Wright.

Grange Hall Burger Bar, located at 844 W. Randolph in the West Loop, should be voted as one of the worst places to get a burger in Chicago. With a slim selection of burgers, you would think they would be tasty and well made. But this is unfortunately not so.

Grange Hall Burger Bar tries to take a unique spin on the American classic. All of their products are grass fed, GMO and gluten free. As you can guess, Grange Hall caters more towards the touristy and hipster crowds. The burgers there are mediocre on a good day. The burgers were soggy, lacked flavor, and despite being ordered on the rare side, were too bloody to be considered safe to eat. You might as well go ahead and take a bite out of a living cow. Not to mention, the buns were very soggy and you could feel it break apart in your hands the moment you picked it up.

There is one burger option, which I am unsure was just a monthly special, but it was absolutely appalling. It was known as a breakfast burger that was literally a hamburger patty on a piece of french toast that was too soggy to eat. It was topped with a sausage patty, then a slice of unmelted cheese, and then a fried egg on top. It’s then covered in a generous amount of syrup. Overall, because of the differing textures that turned to mush, it was very unpleasant to where I had to spit it out into a napkin. The taste was very disgusting to where my nose snarled and turned me off from the rest of the meal. The french fries (which are really fried potato chunks) may be the only saving grace for this hillbilly establishment. The food was so bad that ordering dessert would be giving them charity money instead of actually enjoying the food.

There is a full bar with country themed names for specialty cocktails and drinks. Nothing more, nothing less.

Service is another downfall. The hostess is kind and very apologetic for making you wait because Grange Hall does corral all of the customers into a small, communal seating area. The wait times can be absolutely ridiculous and you more than likely will be seated after a group that came after you and waited less time. Also, the waiting staff is rude. At first, it was hard to tell if that is a gimmick of the restaurant but no, the waiting staff is just flat out rude like rolling their eyes when one of the meals was cold – another way to guess that this was probably left out longer than necessary.

To sum up, just avoid Grange Hall Burger Bar. One out of five torches.