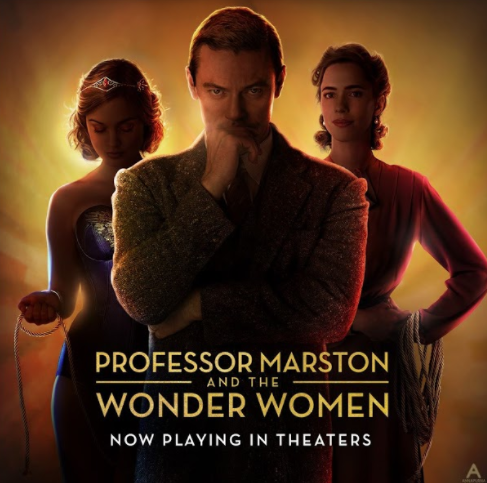 “Professor Marston and the Wonder Women” tells the story of how psychologist William Moulton Marston (played by Luke Evans) was involved in a polyamorous relationship with his wife Elizabeth and his mistress Olive (played by Rebecca Hall and Bella Heathcote respectively), and how he created the “Wonder Woman” comics.

After the three of them are removed from Harvard University, they help William create his Wonder Woman comic book. Much of the movie revolves around William answering to a censorship committee in which he is not able to handle the negativity toward him and his ideas.

I was amazed by how this movie had a admirable plot. I had never heard of these actors before watching the movie. However, I was impressed with the acting skills of Hall and Heathcote, which pulled me into the story. The movie delighted me so much that it kept my attention for its entire duration. The distinct personalities of Elizabeth and Olive along with the arguments toward each other were compelling. This movie has scenes where both Elizabeth and Olive do not only have separate sexual relationships with William, but also with each other.

Yet everything from this movie except the bisexual relationship between Elizabeth and Olive has not been found to be true. Since the Marstons kept their lives private, this movie is a drama with a storyline written by Angela Robinson, who is the director of the film.

Even with a fictional plot, this movie is worth seeing. It does contain mature scenes which should be taken with an open mind or at least with maturity. However that doesn’t detract from the fact that this movie is beautifully made.