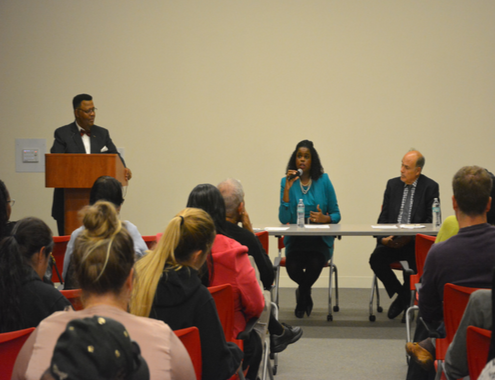 The event was held by the Roosevelt’s St. Clair Drake Center for African and African American Studies.

The St. Clair Drake Center is dedicated to “exploring the contributions, challenges and conditions of Africans and African Americans, as well as under resourced communities”, according to their mission statement.

The official title of the panel was “Urban Crisis, Chicago’s Future: Violence, the Law, and Public Health.”

The two panelists’ combined experience and expertise in law and public health yielded a great discussion on how Chicago might move closer to a safer place to live.

Heeseman said Slutkin’s perspective on the spread of violence was interesting because he said that it should be treated like the issue of infectious diseases. He emphasized that the panel had educated those who attended and while it may not always seem like it, people are working around the clock to fight the issue.

The discussion also helped to bring attention to the severity of Chicago’s violence.

Olivia McConnell, from Crystal Lake, a northwestern suburb, said that before attending the panel she was “…unaware on how serious the violence was in certain parts of the city.”

However, she thought it was promising to hear from prominent figures like Foxx and Slutkin, and the different approaches being taken to hopefully decrease the amount of violence.

“…It was interesting to hear that providing neighborhoods with certain special programs actually helped decrease the violence,” said McConnell.