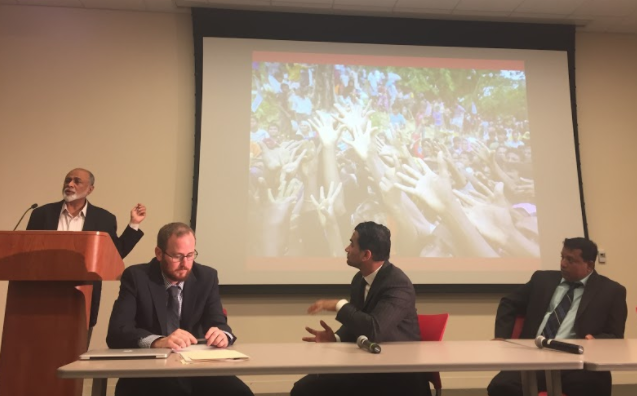 Professor Hultquist and guest speakers on the panel. Photo by Vanessa Leal

The Rohingya crisis in Myanmar has recently reached a new spike of violence. The result was an influx of 400,000 Rohingya refugees fleeing to Bangladesh within four weeks starting on Aug. 25. The Rohingya people are an ethnic minority of Sunni Muslims in the Buddhist majority country of Myanmar. They are denied of citizenship, as well as access to education, healthcare and international travel. They have also been targets of what United Nations human rights chief, Zeid Ra’ad al-Hussein has called “a textbook example of ethnic cleansing,” according to the New York Times.

The panel was introduced by Jack Lawlor, president of the Association of North American Dharma teachers and a Dharma teacher at Lakeside Buddha, whose statement was outlined by panel moderator and political science professor Philip Hultquist. Before Lawlor spoke, Hultquist explained that the crimes against humanity carried by Myanmar has opened questions about the role of Buddhism in the problem.

Lawlor’s introduction was a declaration of support from the Buddhist community in Chicago and other parts of the world to the Rohingya people.

“This is from the bottom of my heart. Buddhists throughout the world have been trying to prevent this tragedy in ways known and available to them in the last six years,” Lawlor said.

Lawlor explained in previous years, Buddhist teachers have spoken out against the oppression to the Rohingya people and that Lawlor himself has written to Buddhist leaders and the president of Myanmar, Htin Kyaw, advocating against the discrimination and violence against the minority.

The three panel guests then followed up with brief presentations to explain the crisis’ roots and their consequences.

“Just like the Jews in the 1930s, this minority is different. They have different features, different skin color, language and religion,” Ibrahim said. Ibrahim explained it started with discrimination of the Rohingya, boycotts of their business and bus stations refusing to sell them tickets. “But as time goes on, it gets more and more sinister,” Ibrahim said.

The already uneducated minority started to get banned from schools, banned from participating in elections and then from voting altogether said Ibrahim. Slowly, there was a understanding that the Rohingya people could not be a minority since they were not part of Burma’s society at all. The regional government then restricted their presence to camps. Ibrahim said from that point the religious clergy incentivized violence against the Rohingya.

The Director of the Burma Task Force, Abdul Malik Mujahid, explained that in Bangladesh, the incoming Rohingya people are not considered refugees. Currently, Bangladesh only allows 30,000 refugees, and as Mujahid pointed out, before the incoming of approximately 400,000 Rohingya since August, there were already half a million Rohingya in the country.

“So the real impact is one milion people devastated in a matter of four weeks,” Mujahid said. In Myanmar, for the last several months, violence, including rape, has taken place and a local mayor have sent disturbing warnings to the Rohingya people, Mujahid said.

“Very conveniently, Jews were to be blamed for the Holocaust if you listen to Hitler… Here of course, the Rohingya have to be blamed for everything they do without any proof,” Mujahid said. About 17,000 Rohingya have been killed, and some say more. “It is a genocide, except we keep calling it ethnic cleansing. This is out of nonsense,” Mujahid said.

The third speaker, Nasir Zakaria, a Rohingya refugee and the director of the Rohingya Cultural Center in Chicago, delivered a speech about his own story.

“When I was 14 years old I left my country,” Zakaria said. “Our people don’t speak Burmish language because they can’t go to school.”

Zakaria explained that for not speaking Myanmar’s language, the government claims the Rohingya people are illegal immigrants from Bangladesh and therefore, are not citizens. “Education is important to me. When I [came] here in 2013, I’m free. In this country, freedom [is] for everyone,” Zakaria said.

RU students in the audience shared their take-home message from the panel.

“It is important that we involve the UN in helping the whole Southeast Asia region to give support to the Rohingya people, take in refugees and give support to Bangladesh” said Conor Ryan, a freshman computer science major.

“The presentation was extremely informative on events I didn’t have much background knowledge, other than some of the geopolitical events that are going on in Southeast Asia,” said Daniel Roy, a junior economics major.

“I think this is something that should be payed attention to by most of the international community,” Roy said.

Like Loading...
‹ The Problem with Indigenous People Day
“The Mountain Between Us” Offers A Chilling Love Story ›