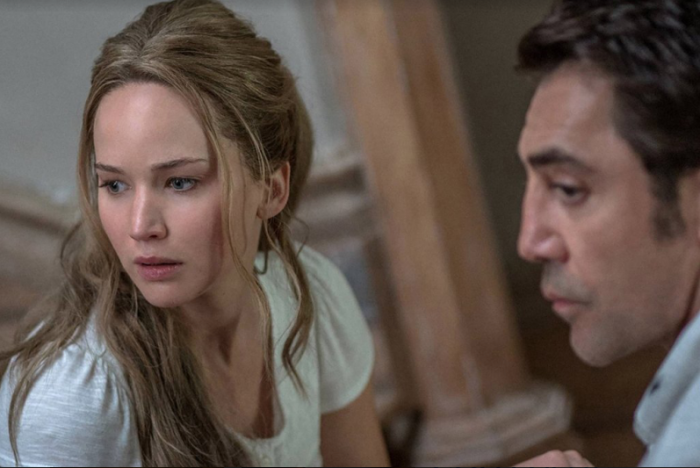 “Mother!” was a hard movie to swallow. It is a dark fantasy jammed with criticism of the humans that inhabit the earth through the use of Biblical references. The storyline doesn’t come together until the very end.

It was weirdly fast paced, while still dragging along. The movie follows an unnamed husband and wife. We follow their love life as it slowly dwindles from organized and “perfect’ to hectic when they start to have sinister strangers visit their house. Once the guests start to come, it quickly becomes disastrous.

Lawrence’s performance was just as good as all of her other roles. One could feel for her character as she is walked all over, and it is easy to identify with her character’s annoyance. The audience sees this woman completely lose herself and her sanity, while her struggling writer husband basks in the attention he receives not only from his wife, but from the strangers that somehow end up in their house in the middle of nowhere.

When I watched the movie, it reminded me a lot of “Rosemary’s Baby” when it comes to the estranged relationship between the husband and wife. “Mother!” criticizes and demonizes the “Adam and Eves” and “Cain and Abels” that ruin Mother Nature. If you do plan to watch the movie, you will see the commentary on what people have done to our planet and you’ll see the allusions to stories in the Bible.

There is violence and mental torment, so it’s probably not for the faint of heart.

I’m conflicted on how to feel about the movie, because I felt like the acting was pretty good and artistically impressive, but the storyline was not attention-grabbing, and I found myself wanting to leave the theater.