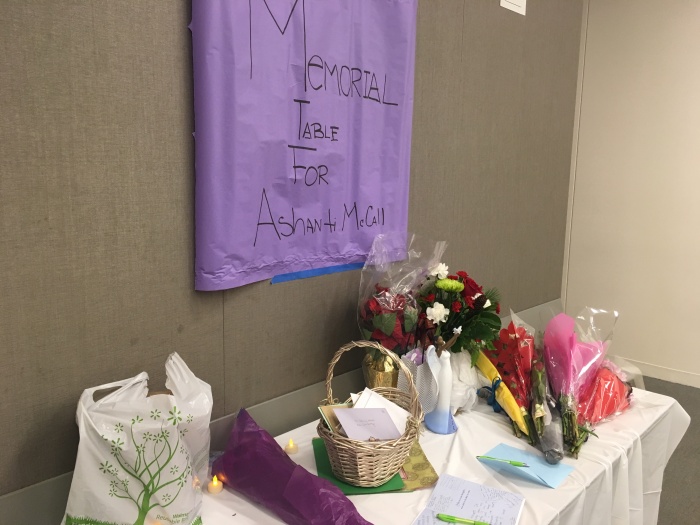 Fall 2016 Roosevelt graduates walked across the Auditorium stage on Commencement day, but there was one student missing. Ashanti McCall’s spot in line was not empty however. In her place, was her younger brother Jaden Dupaty who received her diploma wearing her cap, gown, and BSU stole as Ashanti’s picture flashed on a projected screen above the graduating class on Dec. 16.

McCall died suddenly on Dec. 7, a week before she was going to walk across the stage herself. McCall’s friends and family said she had health issues over Thanksgiving break, but felt better and completed her school work and requirements to graduate before she passed away due to unknown causes.

McCall received a bachelor’s degree in Psychology and a minor in journalism.

Jazmine Terrell- Harley, who’s been friends with Ashanti since 2012, said graduation was something that she and Ashanti been looking forward to since last year.

“After the passing of Ashanti, graduation was a very bittersweet day [and] moment. I was looking forward to us hugging each other and finally being able to say we made it,” Terrell- Harley said. “Honestly, it was hard to graduate without Ashanti. I felt uneasy and weird walking across the stage because that was something that we were going to accomplish together.”

Maiya Shackelford, senior IMC major and Black Student Union’s director of programming, recalls McCall’s involvement with BSU as their president as someone who led by example.

Shackelford said that McCall would send members messages telling them how much their work was appreciated.

“She’s very genuine, very brilliant. A smart young lady. She’s definitely a role model. Even though I was older than her, I always admired her for her strength and her wisdom that she imparted on us,” Shackelford said.

Shackelford said that McCall’s passion, activism and inner beauty is something she admires a lot. McCall inspired her and when Shackelford graduates it’s going to be in memory of her.

“When I get my masters in journalism and I walk across that stage, I’ll be walking for her,” Shackelford said. “ Every accomplishment in regards to school, I’ll be doing for her because she’s not physically here to do it. I feel that if I can carry her with me that will be my contribution to her legacy. I love and miss her, and am grateful to have known her as a person.”

In May, McCall won Roosevelt University’s Matthew Freeman Social Justice Award for her work as a peer mentor in the Academic Success Center and commitment to social justice. According to Associate Director of the Academic Success Center, Daniel Smith, McCall’s dedication was apparent in how she cared for people and in the hours she put in helping others before doing her own work.

Nancy Litke, director of the academic success center, knew McCall since Ashanti came to Roosevelt and said she embodies what Roosevelt was about.

“She had a knack of getting to some of the students that Danni and I couldn’t get to, and knowing which students needed a gentle nudge or or a forceful voice or a cheer that they were doing well,”

One student mentee of McCall’s, Shawn Zelikson, described McCall’s mentorship as a tough but necessary love that helped his studies improve.
“When I first came to roosevelt I had mentors that didn’t work well and then they assigned me to her because she was a tough one. She was tough, but tough love. She was selfless and put everyone else before herself,” Zelikson said.

McCall was Zelikson’s mentor for over a year.

“She kept me on task because I procrastinate a lot…My grades changed, she kept me organized,” Zelikson said. “She had her own special spot at the table and now she’s not there, it’s just empty.”

Litke also elaborated that McCall was supportive and inclusive to all students, including those with different type of disabilities that often visited the academic success center.

“She always made those students intermix with the other ones in a really comfortable manner,” Litke said. “That table she initially started on got bigger and bigger, and then it was Ashanti’s table because everybody wanted to be near her.”

Eric Chaney, RU Alum May 2016, was on his was way to Chicago to see McCall graduate when he learned that she passed.

“Ever since she passed all I can think about is her smile. She had the biggest brightest smiles,” Chaney said. “One of the things I really miss is that she was so relatable and her spirit was so warm and inviting.”
He recalls one of the last times he saw her.

“I remember I was away for months and I just came back to see her and she ran and jumped to give me a hug. I’ll cherish the little things and always keep that in my memory of Ashanti,” Chaney said.

Black Student Union held a memorial on Dec. 12 in WB 418. The room was filled to standing room only. Students, faculty, administrators, McCall’s family, and her pastor from St. Sabina Father Pfleger were in attendance and spoke during the memorial. McCall was also active in her church and community.

The audience in the room gave a resounding clapping and shouting for a few moments as a moment of celebration and remembrance.

Father Pfleger urged those mourning Ashanti to not just remember her, but celebrate her life and values everyday.

“Let’s take the things we loved about her and make sure we’re showing them,” Pfleger said. “On a day we’re so cold and disconnected from one another, let’s live our lives caring, reaching out and befriending people like Ashanti did. Let’s connect with people like Ashanti did. Let’s take the best things that touched our lives about her and make sure we put them in our lives and showing them just like she showed them to us.”