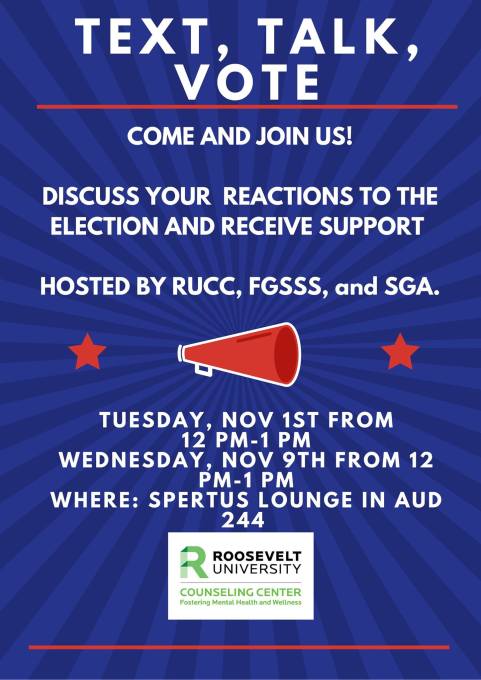 Roosevelt’s Student Government Association (SGA), the Counseling Center and First Generation Student Services are holding an event during the week of November 1 to help students have a medium to talk about the 2016 presidential election cosponsoring an event Text, Talk, Vote which will occur in the Spertus Lounge in the Auditorium Building Room 244 on November 1 from 12 p.m. to 1 p.m. and again on November 9 at the same time.
In an email further regarding the event, the three organizations described what exactly it will entail.

about voting with a small group of young people (3-4 per group). The group receives and discusses prompts delivered by text, interacting with each other and moving through the program at their own pace,” the email said.
SGA President Nathan Stoll explained that this event is designed to get students talking about not only the presidential election, but also the contests for judges and other races currently being contested.

“It’s a guided discussion that uses prompts from text messages to engage students with one another on matters of democracy, America, and our future. There will also be voting resources available at our event with guides to which candidates stand for what,” Stoll said. “We want students to leave feeling empowered to make a decision that is best for them and we hope this discussion will help facilitate that discussion.”

The event will consist of two parts.

The initial meeting on November 1 will be entitled “Dish It Up” and it gives students a chance to react to what has happened in their elections thus far and a platform to discuss how their individual communities have been affected by the issues.

Part two of the event will take place on November 9 and will “provide space for emotional debriefing and reactions to the outcome of the election.”

As to why students should vote and participate in politics, Stoll explained that it gives students a chance to put people who care about the same issues as themselves into office.

“It’s a chance to take all of that work we do (through activism) and put it into action,” Stoll said. “You can change the outcome so that people who represent you are elected.”
“This election is a lot bigger in the past,” he said. “Millennials make up one of the largest voting blocks, but they often do not vote.”

And SGA is not stopping with just getting students registered either. On election day, they will be taking students to actually go out and vote.

“We want to make voting feel like a community activity,” Stoll said. “This will give a better chance to enact change.”