Home › Feature › What does social justice mean at Roosevelt University?

What does social justice mean at Roosevelt University? 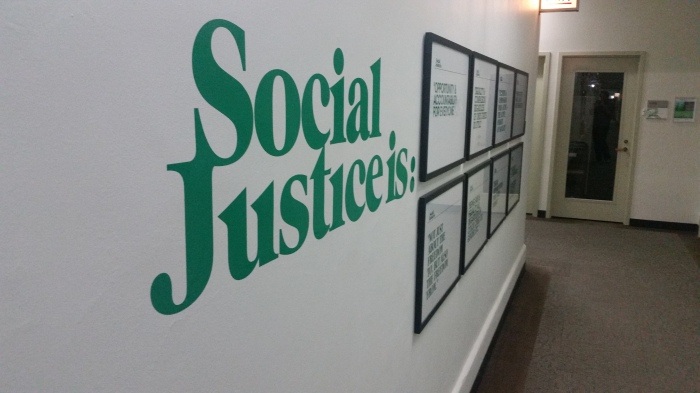 What differentiates Roosevelt University from its urban peers is the commitment to social justice by instilling the mission into its students. Being a university in a largely liberal city, Roosevelt is fundamentally designed to bring in progressive-minded people through its doors who already have a strong sense of and commitment to social justice. The question emerges, however, what happens when those ideas aren’t all on the same page?

While it’s widely acknowledged that Roosevelt is an institution of social justice, it has faced criticism from some students. Some students claim that the university has been soft on its mission statement and that not enough is being done to achieve a functional and sincere definition of social justice amongst its student body.

Jason Curry, a senior at Roosevelt, expressed his belief that the university’s mission statement took a hit under the previous administration.

“I think that the social justice mission has been watered down in recent years, and I think most of the blame should go to President Middleton for making the mission a less active part of Roosevelt.”

He also expressed that most of his knowledge of social justice came not necessarily from the classroom, but from the wider environment in Chicago.

“I was at the Trump rally at UIC last year to protest,” Curry said, “and there were all these people with me protesting him together, so to me that’s a great example of social justice in action.”

Conversely, there are students at Roosevelt who feel that the mission statement goes too far as opposed to not far enough, and that their views are compromised as a result. Emily Minner, a conservative student at Roosevelt, holds this view.

“I’ve grown up with a lot of [conservative] ideology, so my views aren’t always compatible what the mission of Roosevelt. They partially are, but I’m not at the point where I can say that I agree with everything. I wouldn’t necessarily say that my opinion is devalued here at Roosevelt, but it is hard to speak my mind sometimes.”

Minner also said that while her views don’t perfectly align with the university’s, exposure to new ideas she has learned at Roosevelt has caused her to reexamine her beliefs and said that her ideology is “in transition.”

When asked about her take on Roosevelt’s mission, sociology professor and chair of the Mansfield Institute for Social Justice Dr. Heather Dalmage said that for the most part, Roosevelt gets the job done.

“I think as it’s written, there’s nothing wrong with the mission,” Dalmage explained. “I believe personally that the challenge for us comes in the form of getting students engaged through a variety of experiences and perspectives. That’s how you create more active leaders.”