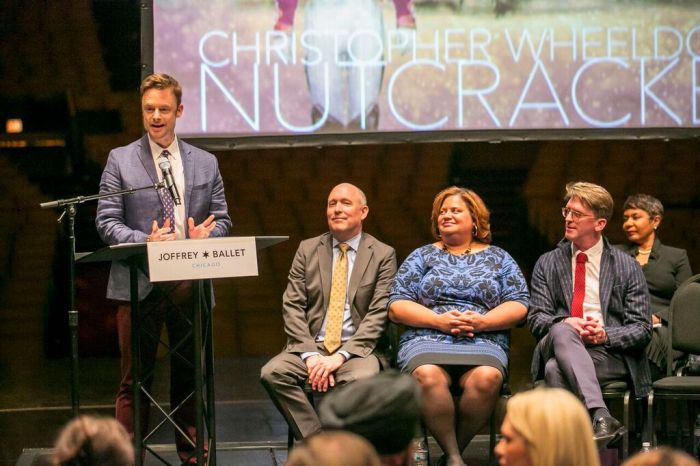 The Joffrey Ballet announced its new production of “The Nutcracker” on April 11. Photo courtesy of Todd Rosenberg

With the help of the Joffrey Ballet, the 1893 World’s Fair will be coming back to Chicago this holiday season through the company’s reimagined production of “The Nutcracker.”

“For more than two decades, Robert Joffrey’s ‘The Nutcracker’ has touched so many hearts,” Cameron said. “We’re honored to create a Nutcracker that is uniquely Chicago and look forward to sharing the magic of dance with children of all ages and their families.”

“It was always my wish to create a Nutcracker that belongs specifically to the Joffrey Ballet – a version that accurately represents its position as a premiere American ballet company dedicated to presenting unique repertoire and cutting-edge works,” Wheeldon said. “This Nutcracker’ will push the boundaries of classical dance and transport audiences to a magical moment when Chicago transformed into a beacon of wonder.”

“This December, celebrating 127 years of the Auditorium Theatre, we will come full circle, reimagining the World’s Fair through the eyes of Christopher Wheeldon,” O’Bannon said.

According to a written statement, the Joffrey Ballet’s production team for “The Nutcracker” will be composed of award-winning artists such as author and illustrator Brian Selznick, award-winning puppeteer and MacArthur Fellowship recipient Basil Twist, five-time Tony Award-winning lighting designer Natasha Katz and Tony Award-winning projection designer Ben Pearcy. Live music from Tchaikovsky’s score, conducted by Scott Speck, the music director of the Joffrey Ballet, will be played by the Chicago Philharmonic at each performance.

Preview performances of Wheeldon’s “The Nutcracker” are scheduled to take place at the University of Iowa’s Hancher Auditorium Dec. 1-4, according to the Joffrey Ballet.

“Great art takes time,” said Ashley Wheater, artistic director of the Joffrey Ballet. “Christopher has assembled a magnificent artistic team, and together they are inventing a magical world amongst the grand concourses of the White City.”