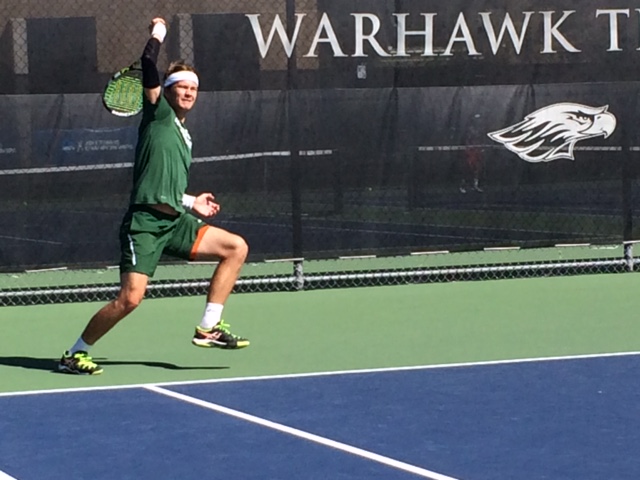 The men’s tennis team is making positive strides after starting the 2015-16 season with an overall record of 8-4. They are also 1-1 in conference, according to Roosevelt Athletics.

Head coach Lucian Tabic described the positives behind the team’s success so far.

“This season our team took many steps forward,” Tabic said. “We were able to continue building on last year’s solid foundation and furthered our identity as Lakers Tennis. Everyone came together and welcomed our new players so we made great progress in taking the next step to continue our program.”

Alongside some positivity, the team experienced struggles along the way. According to junior team member Serhiy Kiyasov, the team had moments where they lost focus in close matches.

“The down side of the season is that there were moments where we lost concentration and gave up important points in close matches,” Kiyasov said. “The key is to ‘keep your eyes on the prize’ at all times. This means that we have to work on our mental stability.”

With the recent loss of possibly a couple players, the team is now learning to adjust as they continue their journey into conference play, according to sophomore Josh Moller.

“After the loss of one [and maybe two] of our teammates that have been essential in our victories thus far, the mindset in the locker room is to just remain in one piece and finish out the season as strong as we can,” Moller said.

Despite the team’s struggles, Tabic believes that the team is still very close to fulfilling their goals this season, individually and collectively.

“I feel like we are very close to fulfilling both our team and personal goals,” Tabic said. “The initial stages of any young program are focused on program identity, foundation building and getting the sense of camaraderie that plays such a big part in team sports.”

Moller is on the same page as Tabic, saying that the team has actually surpassed their goals over the past few years.

“I feel like our team goals have been fulfilled in how we have progressed so far since three years ago,” Moller said. “All teams have easy and tough years. This year has been a tough year for us. I feel like I have progressed a great deal, especially in my doubles game.”

According to Kiyasov, the key factor to this team’s continuous success is friendship and loyalty.

“The key factor to keep up the realization of our goals is to maintain the friendship and loyalty among each of our teammates,” Kiyasov said. “It is important to make sure every person enjoys team practices and activities, because otherwise, that person would not be interested to compete.”

Like Loading...
‹ RU Proud offers Ally Training as part of Social Justice Week
We don’t need transphobia in our bathrooms ›