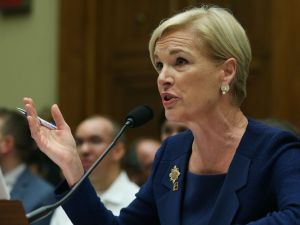 During the hearing, members of the committee pointed out the millions of dollars that the organization spends on non-healthcare related expenses, including travel costs and corporate office space.

“Does Planned Parenthood really need a federal subsidy?” said Republican Rep. Jason Chaffetz of Utah. “Every time we spend a federal dollar, what we’re doing is pulling money out of somebody’s pocket and we’re giving it to somebody else.”

“With respect, I think the question here is: Do low-income women in this country have the right to choose wherever they want to go for healthcare?” Richards said.

Richards also addressed the issue of undercover videos that were leaked and doctored to paint Planned Parenthood in a bad light. These videos have been a talking point among those wishing to defund Planned Parenthood, such as Republican presidential candidate Carly Fiorina.

“The latest smear campaign is based on efforts by our opponents to entrap our doctors and clinicians into breaking the law — and once again our opponents failed,” Richards said.    “The outrageous accusations leveled against Planned Parenthood, based on heavily doctored videos, are offensive and categorically untrue.”

Richards also said that doctors working for Planned Parenthood comply with the requirements of them set by national laws in terms of the false claims that Planned Parenthood were harvesting fetal organs and tissues in order to make a profit.

“The entire time I’ve been in Congress, I’ve never seen a witness beaten up and questioned about their salary,” said Rep. Carolyn Maloney of New York. “Ms. Richards heads a distinguished organization providing health care services to millions of Americans and I find [the questions] totally inappropriate and discriminatory.”

“My colleagues like to say this isn’t a war on women,” said Rep. Gerry Connolly of Virginia. “The disrespect, the misogyny rampant here today tells us what is really going on.”