Home › Opinion › Why the revolution in Kiev matters

Why the revolution in Kiev matters 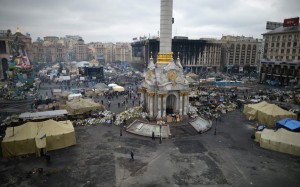 Through the toppled, intricate architecture and ashes of the fallen that were marred to the ground, the momentous revolution appeared eternal when former Ukrainian President Victor Yanukovych was ousted in late February, as rays of hope split right through the heart of Kiev.

The politically charged and volatile region has been witness to bloodshed amongst the pro- and anti-government opposition, as searing bullets and the omniscient presence of camouflage riot gear — seemingly everywhere — pervaded the dense, Ukrainian air, while Molotov cocktails routinely lit up the night sky in Independence Square for more than a month.

The bloody sequence of events started when Yanukovych, a close ally to the Kremlin, nixed a deal with the European Union last November. Outrage erupted in Ukraine when news broke, as the economy was and still is severely struggling.

According to the BBC, the Ukrainian currency, hryvnia, has fallen to its lowest value, when compared to the U.S., since it was introduced more than 18 years ago.

The hematic protests hit their political apex on Feb. 20 when 88 people were killed in Kiev.

All seemed well when opposition leader Oleksandr Turchynov was announced as the acting President of Ukraine on Feb. 23.

Protests turned into bonfires — not everywhere, but somewhere — as the fierce protests quelled, and all was quiet on the eastern European front.

Until, Russia militias captured central buildings in Crimea near the tail end of February.

Russian President Vladimir Putin then got authorization from the Russian Parliament to send troops to the area to defend the sizable Russian population in the country on March 1.

It was reported a few days ago by many major media outlets that the Crimean Parliament has asked to join Russia, which set a referendum for March 16.

News shocked many in the politically charged region, as Crimea was originally awarded to Ukraine following in 1954 and stayed that way even after the Soviet Union collapsed in 1991.

President Obama came out during the protests and even warned Russia, saying, “There will be costs for any military intervention in Ukraine.”

U.S. Secretary of State John Kerry was recently sent over to temper the escalating situation.

The question for many Americans is this: Why is this revolution important?

The reasons are, seemingly, endless but one of them is in the favor of total Ukrainian independence from its traditionally recognized allies in the East.

Yanukovych was a close supporter of Putin, and the protests were largely because of the deal that the former president called off with the EU. Also, there were charges of corruption that were leveled against him, as those closest to him rose in power and money, including himself, while the middle class suffered.

However, when one looks deeper, it seems the Ukrainian people want to have a government without any influencing agendas of neighboring countries (i.e. Russia), and that’s something to be applauded.

This isn’t to say that Russia is in the wrong for trying to control the situation, as Crimea was once theirs a long time ago.

According to the Kremlin, Putin said, in a phone call with British Prime Minister David Cameron and German Chancellor Angela Merkel, that “the steps taken by Crimea’s legitimate authorities are based on international law and aimed at guaranteeing the legitimate interests of the peninsula’s population.”

The tense situation between Ukraine and Russia has too many geopolitical effects and ramifications that can be solved in a matter of mere months, but that doesn’t mean that the former country isn’t trying, as Ukraine is planning special elections to elect the next president.

However, as the visceral images of protests happening in Kiev continue to be painted all over the TV, one can’t help but be filled with the same ardent feelings when former Egyptian President Hosni Mubarak was removed during revolution back in 2011.

This revolution matters in the name of independence.

In that sense, the people of Ukraine should decide their own independence for the salvation of their country without anyone dictating it for them.

Like Loading...
‹ CTA California Blue Line to shut down in late March for reconstruction
Russian takeover of Ukraine: Palin was right, Clinton is scared ›