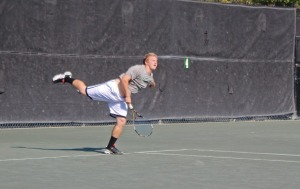 Two tennis courts—each replete with freshly paved green gravel and white chalk outlines—set up the perfect training ground for the two teams, as yellow spheres blurred across black netted fences, barreling at speeds that only tennis players could ever really be comfortable with.

A few spectators—some family and friends—were on hand to witness the men’s and women’s Lakers tennis teams compete against Calumet College of St. Joseph at 1 p.m. last Friday at the Diversey Tennis Center.

Decked in black shorts and gray t-shirts, the Lakers men’s tennis teams practiced warming up, which gave Head Coach Jim Bates a few fleeting moments to reflect on the season, so far.

“Well, we did a practice scrimmage against Prairie State, and we won that,” Bates said. “Typically, the fall season is training season, which gives the returning kids extra experience, and the new kids kind of get their feet wet and gets them an introduction to college tennis. The spring season is really the one. That’s the one that has the conference tournament, your spring break trip, and regular season conference matches.”

The matches were soon underway, as it was a best of nine matches—with the first to five being declared the victor.

A particularly intense match took center stage for the small crowd that was in attendance.

Sophomore Matt Kuntzi and freshman Carlos Alcantar played in a fiercely competitive match with Calumet College, which was hard-fought up until the very end, with the match ending 8-7.

“We got broke,” Alcantar said.

Alcantar and Kuntzi only recently became teammates. Although, you could never tell, as their collective play appeared seamless.

“Our first couple [of matches] started off a bit slow, but now we’ve definitely gotten to the point where we’ve gotten the ball rolling,” Kuntzi said. “Now, we’re getting some great shots out there.”

However, as Bates stressed earlier, the results aren’t always what matter, at least not yet in this young fall season with the ever-so-important prospect of conference play looming in the horizon.

The vital experience gained in these matches can serve as building blocks for these skilled athletes who represent the university, which matters a whole lot more, according to Bates.

“The reason that we play these matches is to give the experience in dealing with that stress or those emotions,” Bates said. “How do you handle it? If you’re off today and there’s nobody to pass the ball to, how do you deal with that as a tennis player? It’s about adjustments.”

With the obvious talent and enormous potential displayed on the courts today, there’s no telling how quickly the Lakers tennis teams will get better or how great they will be.

Like Loading...
‹ Administrators discuss future of Schaumburg Campus, as enrollment declines
CCPA alumna to perform in dramatic musical take on “The Wedding Singer” ›